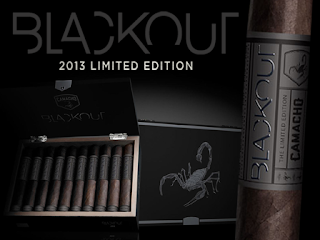 The newest in a wave of releases from Camacho is now available. Camacho Blackout 2013 Limited Edition, a limited-production, vintage-dated line from the Oettinger Davidoff Group, is now available nationwide.

As with all Camacho products, Blackout is rolled in the company’s Honduran factory. The blend consists of a Honduran wrapper, Nicaraguan binder and Honduran, Nicaraguan and Brazilian filler tobaccos. The company said that the wrapper leaf was grown in 2006, the binder in 2009 and the fillers are from a variety of years. Camacho states that the cigars were rolled several years ago, and aged for two years rather than the typical period of several months.

What makes this cigar special is its dark oily wrapper.  The Honduran leaf was picked from the top 2/3’s of the plant and was fermented differently than most tobaccos. A process known as “press-fermentation” was used by placing additional weight on the top of the “pilones” (piles where the tobacco ferments), which intensifies the internal temperatures. The tobacco is worked hard, but carefully, then allowed a longer than usual resting period once packed in bales for aging.

Leaves from the top 2/3’s of the plant get additional sun ripening, which boosts the level of sweetness with additional sugars created during the process of photosynthesis. The heavy oil noticed on this wrapper leaf is as a result of the plants natural defenses, the plant tries to protect itself by creating more oils to fend off the sun’s glare.

Only 1,000 boxes of each size were made for the Camacho Blackout project, amounting to a total production run of 100,000 cigars.